The Awards, which took place at the Great Hall at the University of Exeter last week, celebrate the best of Exeter. Citizens Advice Exeter won in the charity category, sponsored by Wilkinson Grant & Co Property & Acquisition Agents.

Dennis Mardon, Chairman of Citizens Advice Exeter said: “We are absolutely delighted to win this Award. The charity category was very competitive and we congratulate all the finalists for the work that they have done over the last year. 2016 was an amazing year for our charity, having receiving the Queen’s Award for Voluntary service, the equivalent of an MBE for the voluntary sector.”

Dennis finished by saying: “This year we mark 70 years of helping the people of our great City, and will be looking to set up a number of opportunities to mark this fantastic achievement.” 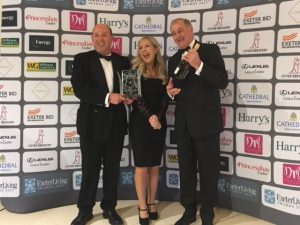